GROK?! is an adventure role-playing game where you assume the role of an adventurer in a gonzo world of boundless plausibility and use your ingenuity and resourcefulness to overcome strange and perilous threats.

Get exclusive access to this Adventure Game by purchasing while quantities last.

Get the digital copy of the game once the project has been funded. (April 2022)

Hey could you post another fresh link yhe the discord? The one below expired

This one is a permanent link and shouldn't expire. Sorry about that, and thanks for the comment!

I'm always having fun whenever I take the game for a spin. Recently, I've been thinking about sort of a ''Grok?! Hero edition'' that introduces some tactical elements, but it's fairly vague at this point.

Is the Discord server still up? The link on the kickstarter page doesn't seem to work.

Glad to hear, thanks for the comment! Here's a fresh link to the discord, and I can't wait to hear what you have in mind!

Genuine OSR feel, the gm-relief of Knave, all the flexibility of Fate and Cortex,  all the wildness of Troika, all the simplicity of FU, and so easily hackable and tack on-able, that at the end, I can do anything with this game, and handle it in a truly simulationist manner. Less is more in this case. Right in line with the FKR. I ran a oneshot game with my uncle as my player a while back, turnwd out great. System was easy to well, grok, on quick and fundamental level. I've also played it solo and plan on doing much more of such. I've also gone out my way to make new rules, like sanity, corruption, a custom hp system, reworked sequencing, saves, and what I like to call "special conditions"(conditions that temporarily lower an attribute value). I don't use or plan on using all of these all of the time, I like the game as is, but it just goes to show how easy you can add. I've also made very simple solo rules, which are placeholders till you make yours, as I remember you talking about them on reddit. Overall, literal 10/10 game, deserves to go down in history as a masterwork.

Also, as for the next solo game I'm going to do, I'm gonna play in a homebrew setting, and I'm going to play a shapeshifting dragon going around as a troubleshooter and justice bringer. I wanted to do this in fate, but it would've taken making whole extras and stunts and way too much work. Here, I can just have the traits and assets, and figure out a simple mechanic for transforming, like an attribite roll, or having some requirement or limitations both ways, as I want for there to be a chance for the character to be stuck in his true form for a bit.

This is so awesome, thank you so much for the feedback and encouragement!! I'd love to hear your thoughts on what types of tools you'd find most helpful for soloplay., And I'm over the moon that you're getting enjoyment out of the game.

Honestly the best OSR game of 2022, possibly of the 2020s. Very original, very unique system, feels like Vagabonds of Dyfed but  more concrete. LOVE IT!

Thanks a lot for the kind words!!!!

I LOVE GROK?! It is honestly fantastic without pretension or artifice. Simply delightful game design all around

Thanks a lot!! I really appreciate your kind words, and I'm glad you're getting a lot out of the game :) 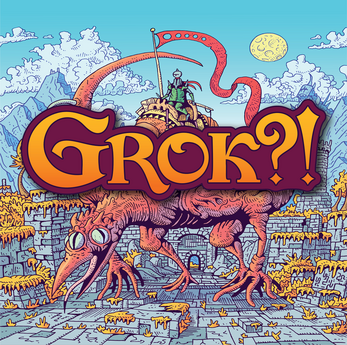